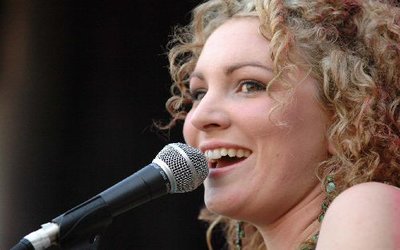 23 year old, Katrina Burgoyne is one of Australias newest and

most promising singer/songwriters with every song boldly painting an organic musical landscape of enchanting melodies, heartfelt vulnerable vocals, strung together with lyrics only to be described as candid and honest.

Releasing her second single I Wasnt Gonna Cry in February 2011. The single was placed as runner up at the 2009 ASA awards, hit the top 30 on radio charts across Australia and has reached over 15,000 views on YouTube. The creative split screen music video shot straight up the CMC top 30 Countdown sitting at #5 just six short weeks after release.

March 10, 2011 Katrina Burgoyne celebrated the independent release of her debut album White Flag. Not to be mistaken as a sign of surrender Katrina considers the true meaning of White Flag is: Believing in ones self so much that against all odds others will believe in you too.

Katrinas personal everyday, ordinary girl approach filters from her hand written text in her album artwork to her self managed website and social networks. Her on stage presence is outstanding as she shares her secrets and makes fun, new memories with supporters as if they are her closest friends.